She was born October 14, 1950 and was a former native of Martinsville, Virginia. Mrs. Grubbs was the daughter of the late Margaret Shelburne Blane and John Blane and is preceded in death by her sister-in-law, Dana Davis Bayley of Raleigh, North Carolina.

Mrs. Grubbs retired from Bowling Green/Warren County Community Education after 17 years where she served as the Enrichment and Volunteer Coordinator; she previously taught for 20 years in elementary schools in Kentucky and Virginia.

She was a member of State Street United Methodist Church.

She was an 11 year cancer survivor.

Mrs. Grubbs was the recipient of the Jefferson Award for Public Service in 2010; The Athena Leadership Award in 2010; and was named the Bowling Green Human Rights Commission Woman of the Year in 2003.

She was a former board member of the Bowling Green Area Chamber of Commerce, she was a member of Kiwanis and was president in 2012-2013.

She was former member of the Bowling Green Women’s Club, the Houchens Center Board and was an ALIVE Center Founding Member.

Survivors include her husband, Michael Grubbs of Bowling Green; several nieces and nephews; hundreds of former students; many good friends and the Bowling Green Volunteer Community.

Expressions of sympathy may take the form of contributions to the Bowling Green Kiwanis Scholarship Fund or the Anne Grubbs Community Education Fund at Western Kentucky University. 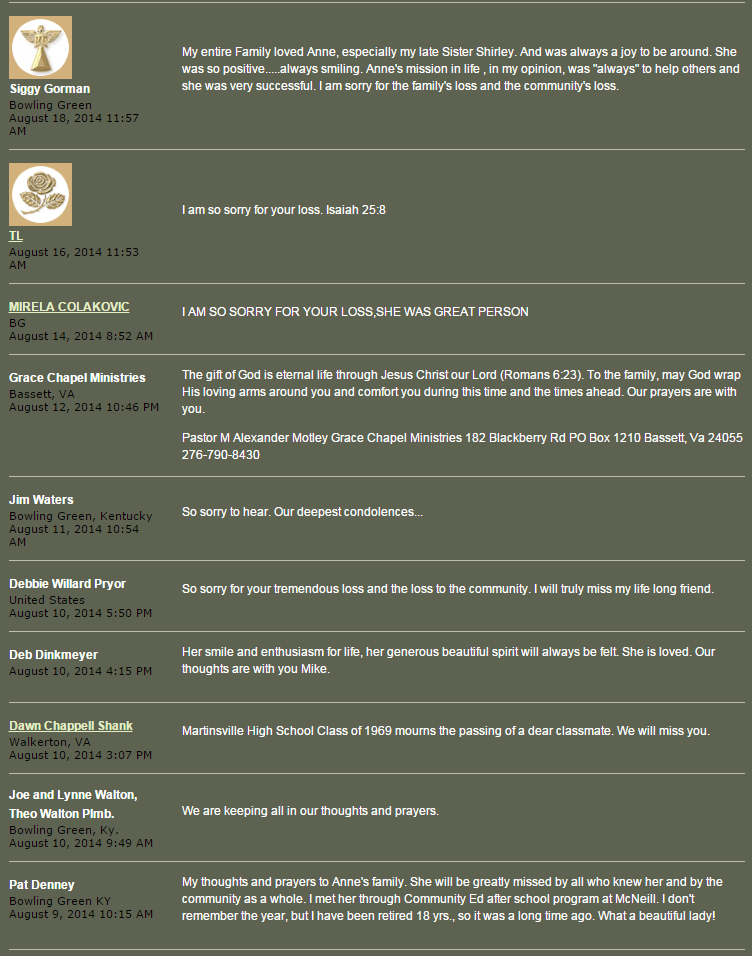